Early on  photography was a hobby, not a career for me.  I engaged with other photographers on Flickr, a place where my collective photos have had 30 million views at this point.  In one of the Flickr communities I became aware that some photographers were getting amazing images utilizing vintage film-era lenses on modern cameras via adapters.  Some of these lenses were 50+ years old, but still could produce some stunning results when used to their strengths.  I began to hunt pawn shops and eBay for vintage lenses.  I found some great values and some gems among the mediocre options.  Some of my favorites were the SMC Takumar lenses and the vintage Soviet Helios lenses.  There were shortcomings, of course, when adapting those lenses.  They weren’t designed for the cameras I was using them on, and my favorite lens (SMC Takumar 50mm F1.4) would sometimes hang on the mirror of my full frame Canon DSLR’s.  I released a whole video on how to deal with this problem back in the day.

These adapters were essentially just metal bits to take the screw-on threads from the M42 mount and convert them to the bayonet Canon EF mount.  Simple and inexpensive, but obviously limited.

The rise of mirrorless cameras helped renew my interest in these vintage lenses.  There was no mirror to cause issues and one could even get stabilization (IBIS) on some cameras along with a variety of manual focus aids that made getting accurate focus a lot easier.  A few years ago I heard that a company named Techart had taken it a step further and had developed a much more sophisticated adapter that made manual focus lenses (like my vintage M42) into autofocus lenses.  I found the concept very intriguing, obviously, and fully intended to get a Techart adapter in to do a review.  My review schedule was very busy at the time, however, so I missed that window and the Techart adapter went off my “radar” as I focused on other things.

But when Techart reached out to me a couple of months ago because they had a new and improved version of their adapter coming out – the LM-EA9 – and I jumped at the opportunity to check out the product and see if it really worked.

Autofocus is typically accomplished by a motor or group of motors in a lens that moves a few of the glass elements in a lens forwards and backwards to focus light properly (which gives you proper focus).  That obviously can’t happen in lenses that are already sealed and finished, so what the Techart LM-EA9 does is move the whole lens forwards and backwards to achieve the same effect.  You can see how this works in my video review.  The focus motors on the adapter extend forward and backwards to move the lens (and its whole optical design) to achieve proper focus.  It’s a rather ingenious concept.

The new LM-EA9 builds on the foundation of the LM-EA7 and previous attempts with several major improvements.  The first is an upgrade to the focus motors (a total of four of them, now) which provides faster, smoother, and quieter autofocus.  This is important, as these focus motors have to deal with a variety of weight and balance combinations.  Most focus motors have a fixed number of lens elements to move inside the lens, and thus the weight needed to move (and the force required to move it) never changes.  That’s not true here, obviously, as the size of the lens you are mounting in front of the adapter can vary widely.  I didn’t notice any real difference between the various lenses I used (only one was slightly bigger – the Super Takumar 150mm F4), but obviously a large, heavy lens is going to make the adapter work harder.

I found autofocus in many situations to be fairly good, with reasonable focus speed (particularly if making smaller adjustments) and some noise but nothing exceptionally loud.  I’ve used lenses that had both slower and noiser autofocus natively.  At the same time, however, don’t expect autofocus to be as fast as the better autofocus lenses.  What I did find, however, was that autofocus was nicely accurate.  Eye AF worked well on my Sony bodies and delivered accurate focus results even if my subject was turned away.

I wouldn’t recommend trying to track action with this combination, however.  It’s just too much to ask.  I found that autofocus lagged a bit when tracking my cat walking towards the camera.

Another big improvement is to the physical design, which is slimmer, rounder, and utterly insignificant in adding either bulk or weight to your camera/lens setup.

Another interesting addition is that the rear lens cap has electronic contacts and a micro-USB port on it to allow for firmware updates (these can also be done via an app and Bluetooth).  I was testing a prerelease copy and had some issues with my camera freezing on occasion when the adapter was mounted (I had to pull the battery to reset things).  I mentioned it to Techart, and a firmware update came a few days later that completely fixed the problem.

Technically the LM-EA9 is a Leica M mount (LM) to Sony E-mount (E) adapter (A) version 9 (9).  But what’s interesting is that you can stack pretty much any basic adapter in front of that and get the same result with other mounts.  I used a M42 to Leica M adapter and everything worked perfectly.

A few observations and tips on functionality:

In general I was impressed with how well the adapter worked, and it definitely breathed new joy and life into some of my favorite old lenses.  Getting autofocus out of a 60+ year old Soviet lens was a blast.

This is obviously a much more sophisticated instrument than the old basic adapters I was using, and the price tag is accordingly higher.  It retails for $399 USD, and that value will probably be relative to A) whether you already have some M-mount or other vintage lenses that you love and B) if the idea of getting the benefit of autofocus out of those lenses is intriguing.  There are no optics in this adapter, so the performance of the lens optically is going to be whatever the lens’ performance was originally.  There are some of you that may have some excellent Voigtländer M-mount lenses that would love to have those amazing optics with autofocus.

So does the Techart LM-EA9 sound like the adapter for you?  You can judge for yourself by either watching my video review below (where I cover things in greater detail) or by enjoying the photos from my vintage glass taken with AUTOFOCUS! in the galleries below:

Thanks to Techart for sending me a pre-release tester of this adapter. As always, this is a completely independent review. *The tests and most of the photos that I share as a part of my review cycle have been done with the Sony a7IV along with the Sony Alpha 1 which will serve as my benchmark camera for the foreseeable future (my review here).

Images of the Techart LM-EA9 Adapter

Photos Taken with the Techart LM-EA9

Want to support this channel? Use these affiliate links to shop at: B&H Photo | Amazon | | Camera Canada | Ebay | Make a donation via Paypal 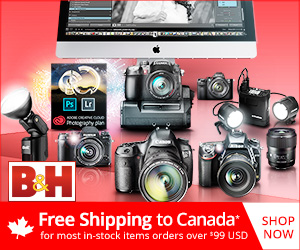 Receive a 5% discount on all purchases at Amplis Foto, Canada’s Leading Photographic Supplier. Please enter discount code: AMPLIS52018DA in your cart. It is good for everything in your cart, and is stackable with other coupons, too! It will take 5% off your entire order! Proceeds go towards keeping this site going and providing you with new reviews!